Cardiff forward Craig Bellamy in frame for Wales job
Posted by Gorseinonboy at 8:36:00 AM No comments:

Published on the16September
2013
11:43
3 comments
Print this
When Louise Lewin posted a photograph on Facebook which she had taken at a crumbling historic hall, friends soon pointed out the ghostly apparition in the picture.
Louise, 34, of Shanklin Avenue, Grantham, is an urban explorer and was visiting Nocton Hall, near Lincoln, recently with her friend John Harrison. She took a photo of him under a cellar of the old building at about 9.30pm, but it wasn’t until Facebook users pointed out the apparition that she noticed the shadowy white shape.
Louise, a care worker, said: “Everybody kept commenting on it so then I looked into the history of Nocton Hall and there was a story about a crying girl who haunted the building. She was a servant girl who was raped and murdered.
“When we were there we did not feel any kind of presence. Reading the stories on the internet I think I do believe it now. It all makes sense. But it’s weird how we did not notice anything at the time. It looks like she is walking next to John and trying to link arms with him. When you zoom in her mouth is open and it looks like she is crying.
“Now we want to go back again and take a proper camcorder and I can use the nightcam.”
Nocton Hall was built in 1834, replacing an earlier hall which was destroyed by fire. The present building was also badly damaged by a fire in 2004. It was last used as a residential home in the 1990s. It was previously used as an RAF hospital.


New headteacher takes over at a ‘cracking little school’

Published on Saturday 15 September 2012 12:05
A VILLAGE primaary school officially now has a new headteacher.
Andy Cannadine has taken over the reins at Nocton Community Primary School having joined the school as deputy in 2009.
It is his first headship and he replaces Nick Dowler who retired at the end of last term, having worked together over the last year for a smooth transition.
Mr Cannadine said: “It has been hectic since coming back. I am still teaching for 70 per cent of the time as well.
“I teach all the Key Stage Two pupils. Because of the size of the school and cost implications that was the only way to do it this year. It is exciting but an incredible amount of work.
“The parents are incredibly supportive and the kids are brilliant. I have been loving every minute and would not swap it for anything.”
He has only been teaching since 2003, having initially started working life as a policeman, later working as a freelance mapping and guidebook editor before retraining as a teacher having felt ‘the calling’ to get back into the public sector. He has previously taught at Kirkby La Thorpe and Leasingham schools and commented: “Teaching is certainly the hardest job I have ever done. I now realise the praise for every colleague in teaching cannot be high enough.” 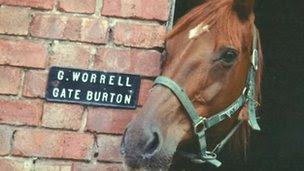 This horse, named Penny, was killed along with its unborn foal
Continue reading the main story

Horse owners and equestrian groups in North Lincolnshire have been urged to get involved in a new campaign after a series of attacks on animals.
Recent incidents include an attack that killed a mare and its unborn foal. Another horse had its tail and mane chopped off.
A Horse Watch scheme has been launched to try to tackle the problem.
As part of the initiative a Facebook page will be set up so people can share alerts and crime prevention advice.
Rider Nicola Latham said she would be "devastated" if anything happened to her horse.
She said: "You always think 'not my horse, not me', but unfortunately some days you go down and it's you."
The scheme has been set up to tackle horse cruelty and thefts of animals or costly horse equipment.
Amanda Barnett, from Humberside Police, said: "The Horse Watch scheme highlights the potential for owners to lose their animals to thieves.
"It's not just the horses that thieves target but also equine equipment including tack and trailers.
"By joining the Horse Watch scheme, it will enable owners to share information and hopefully reduce this type of crime that will also lead to the detection of offenders."

England are doing quite well in the European Championships. Nocton Social club is open on Sunday if anyone fancies watching Italy get thrashed by England ......over a pint!!!!!!
Posted by Gorseinonboy at 7:07:00 PM No comments:

Margaret is our new correspondent

Published on Sunday 29 January 2012 12:05
NEW CORRESPONDENT – The Sleaford Standard has appointed a new correspondent for Metheringham.
Margaret Kristen is now the point of contact for all news, events and activities in the village which you wish to be published in the Sleaford Standard.
Please contact her about your event or let her know it is happening and she will attend.
You can contact her on 01526 322169 or 079458066366, or by email at maggiekristen@hotmail.co.uk
Let her have details of any events or activities before Thursday evening to be included in the following week’s issue.
HALL NEEDS HELP - Metheringham Village Hall Management Committee are looking to appoint a treasurer, chairperson and a secretary. The situation is getting quite desperate now.
Anyone wishing to apply for any of the positions should contact Jenni Honisett on 01526 320968 or email Dot Howes at dot.howes@tiscali.co.uk
The current chairperson will step down at the annual meeting.
BADMINTON – Anyone interested in playing badminton on either Tuesday or Thursday afternoon at Metheringham Village Hall should contact Kay Bulled on 01526 320589.
FOOTBALL CLUB - Metheringham Football Club is seeking people to run the under-7, under-8 and under-9 teams.
The club has plenty of children wanting to play but no one to run these teams. If you could you spare a few hours to help run the teams, contact the club secretary Pete Ford on 01526 320016.
PANTOMIME – Metherinham Amateur Dramatics group will be performing their latest pantomime, Red Riding Hood, this weekend.
The panto, directed by Darren Hawbrook, can be seen at the village hall on Friday at 7.30pm and on Saturday at 2.30pm and at 7.30pm.
Tickets, priced £6.00, are available at D&K News or via metheringhamamaturedramatic.co.uk

Margaret is our new correspondent - Community News - Sleaford Standard
Posted by Gorseinonboy at 5:38:00 PM No comments: